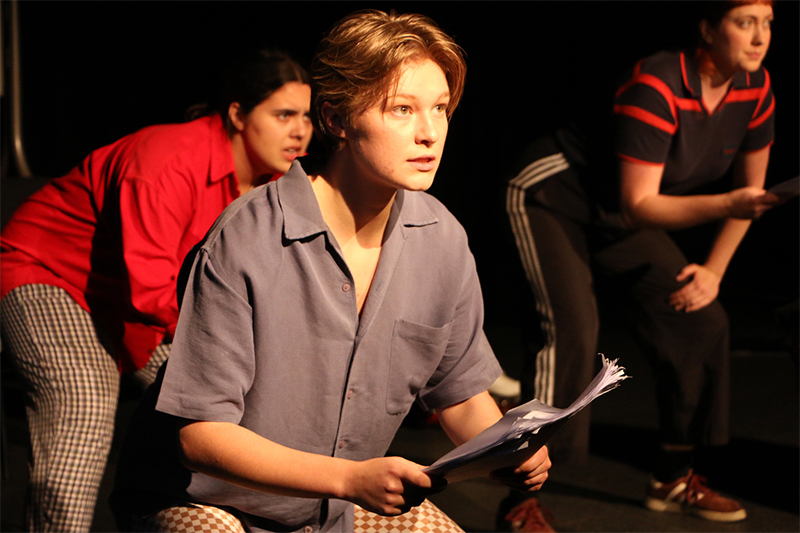 What stories and characters will we be watching next year? Live online and streaming February 14-18, NIDA Writers Readings features excerpts from new plays, screenplays, docudramas and TV scripts.

Harriet Gillies is an award-winning performance artist and theater director working in a range of performance modes. A tutor for the NIDA MFA Writing for Performance program, she said: ‘This exciting group of writers have shown great resilience and dedication to sharing stories that are important to them, over the course of a year. of pandemic pandemonium that has left most of us questioning everything. . Sharing stories that we will see on our television screens, cinemas and stages, these writers show great potential as future leaders of Australia’s cultural landscape.

“These writers draw on very diverse personal experiences, while clearly looking to the future,” said Harriet Gillies. “From serious personal experiences that challenged and propelled, to deeply imaginative fictions and fantasies, these readings will feature a wide variety of genres and styles that demonstrate the exceptional ability, diversity and range of these NIDA graduate writers.”

WRITERS AND THEIR NEW WORKS

From Eliva Andriamora , Sydney-based writer and actor, comes a new TV series titled The dealer. Marcy finds herself signing up as a car sales trainee at an Australian dealership and is the only female recruit to enter the world of car sales.

From Matt Bostock, who grew up in Melbourne expat society from an Australian Chinese father and a Filipino mother, comes a pilot episode for a TV miniseries True Blue: Rob. “Brisbane, 1967. Australia’s involvement in the Vietnam War intensifies. The 1967 referendum has not yet been voted. The White Australia policy was still in place. Rob, a white Australian veteran, his new Chinese-Malaysian wife Shirley and their four-year-old son, John, ask: what does it really mean to be Australian?

From Declan Coyle, fresh off of success at the Sydney University Dramatic Society and KXT Lab, comes the TV pilot Lost and found items. “Ollie and Jamie’s daughter disappeared a year ago. Ollie takes a job reuniting people with their missing items in a lost and found location to fill the void in his heart. Jamie struggles to find the will to break the cycle.When his daughters’ items begin to appear in the inventory, a fire reignites in Ollie.

From Mahsa Foroughi, a Persian poet, critic and interdisciplinary artist, created the docudrama A poetic suicide. “A disillusioned poet and her cynical cameraman take us on an inner spiral journey through the poet’s brain as he tries to escape the trauma of persecution. To reveal and revive the truth, you have to cling to poetry and oscillate between dream and reality, reality and fiction, truth and myth.

Gabe Francois, a writer and theater maker from Lennox Head in northern New South Wales and a graduate of QUT in Brisbane, created a play called One night only. “Since splitting, Laure and Saul have clung to each other. A rock ‘n’ roll themed fundraiser brings the duo together one last time. Dressed as tragic Jagger impersonations and Cher, they struggle to regain a sense of themselves in all that has been lost.

French Holly graduated from UTS in communication and found her place in short fiction, film and mixed media. She created Upstreama television pilot. “No one ever leaves the central coast. He collects the dusty white bogans on an incel’s wallet condom. Lola and the Class of 2014 must navigate the rudimentary social pressures of a town stuck in the past. All she has to do is graduate without incurring permanent deficits like suicide or children.

Jordyn Fulcher is an emerging writer from South West Sydney and is already part of the Sydney Theater Company’s 2019-2021 Emerging Writers Group. She created the room The Martian Expedition. “Deep in the bush is a house that too many people live in, including Abel and Adon. Years later, Abel meets the veteran, Comrade, while volunteering at a nursing home and their abrasive relationship sends Abel on a journey through the constellations of memory and pain to map out what lies beyond.

Michael McStayhas seen several of his plays produced and is an actor, director, musician and 2013 alumnus of NIDA’s BFA (Acting) course. Mount Maddox is his television series. ‘ Conservative journalist Grace Cullen is assigned to interview the family of eccentric anarchist/anti-vaxxer/alien-truther Victoria Maddox, who terraformed her humble farm in the sovereign state of Mount Maddox, including Victoria’s daughter and an alien-sexual (meaning she loves Martians). Slowly, Grace learns to indulge her radical side. And who can blame him?

Siham Serhon is a writer, artist and filmmaker, with a Bachelor of Arts degree in English Literature and Creative Writing (UNSW, 2015). She wrote flawless, a television pilot. “One drunken night, Sharna and her best friend Dee-Dee cast a spell they bought at a market in hopes of creating the perfect man. And out of this desperation and magic universe trick weird, David was born.

James Watsonfrom Adelaide graduated with a Bachelor of Creative Arts (Creative Writing) from Flinders University and created the play Thoughts for the home. “Clara is back in Adelaide. Sara never left. When these sisters find themselves torn between staying in the past and an uncertain future, they must seriously question what “Home” means to them.